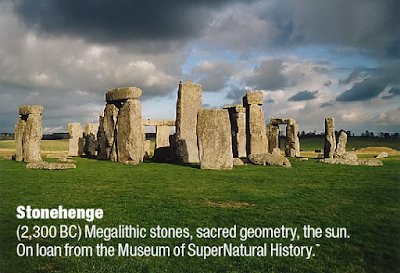 The grateful and deserving citizens of Britain offered up a hearty “Thanks blokes...” after MuSuNaHi proudly and permanently donated Stonehenge to the United Kingdom.
Back in 1986, Stonehenge and its surroundings were deservedly placed on UNESCO’s list of World Heritage Sites, and the beloved and beguiling mythic structure - long the focus of academic and pop-cultural fascination - has always silently begged the question: who, how, and why was it built?
(We of course have always held fast to the theory that Stonhenge is a solar declinometer, or more specifically, a Uriel Machine.)
While a BBC report from the fall of 2008 claims that radio carbon dating definitively pegs the cyclopean sun temple’s completion to approximately 2,300BC, additional evidence attests to the possibility that the site was used for sacred rituals as far back as 8,000BC.
Most impressive of course, are the theories set forth by this dude in Michigan who not only arrived at a rather ingenious solution to the riddle of how Stonehenge was constructed, but then took it upon himself to build a scale replica in his backyard.
To read more, click HERE>
Posted by The Curator at 4:21 PM