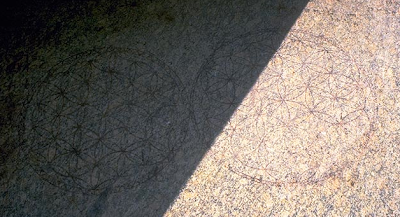 Earlier we reported on a potential breakthrough in the field of human cloning.
While reviewing the sequential embryonic cell division that takes place during the development of life, we were struck by a stunning similarity to a 6,000 year old image depicting “Sacred Geometry.”
Strewn across the ancient world - from the Temple of Osiris in Egypt, The Forbidden City in China, The Golden Temple of India, Masada in Israel, Roman Temples in Turkey, Peru and Mexico in South America, Islamic mosques throughout the Middle East, and the pages of Leonardo DaVinci’s notebook - is a mysterious symbol known as “The Flower Of Life.”
Is it theorized that woven into this complex graphic pattern are many of the sacred symbols of all of the world’s religions, as well as the sub-atomic schematics of life itself: Octahedrons, Borromean Rings, Platonic Solids, Metatron’s Cube, The Vetruvian Man,
To read more, click HERE>
Posted by The Curator at 4:29 PM