Heads: We End Up In A Sleek, Futuristic Utopia... Tails: We’re Vaporized In An Apocalyptic Abyss... 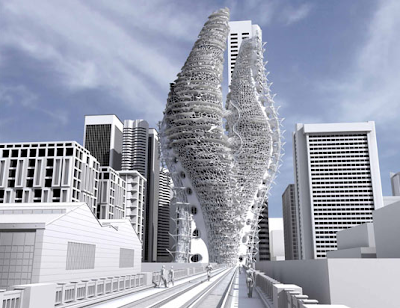 Assuming the galactic alignment destined to take place on December 21st, 2012 - the ever-more ominous end date of the 5,125 year Mayan long-count calendar - does not unleash any number of unpalatable, cataclysmic doomsday scenarios capable of destroying the planet Earth, there appears to be an outside shot that some of us could very well wind up “rolling” like The Jetsons.
According to 192020.org, by the year 2050 more than two-thirds of the world’s population will be living in “Super Cities” such as Tokyo - currently the globe’s largest city, with well-over 35,000,000 inhabitants. Fortunately, this alarming trend of skyrocketing urban populations appears to be pushing the development of “Skycraper Farms;” vertical farmlands that could be the solution to bringing sustainability to the modern metropolises of tomorrow.
Plus, they look wicked.
To read more, click HERE>
Posted by The Curator at 8:22 PM