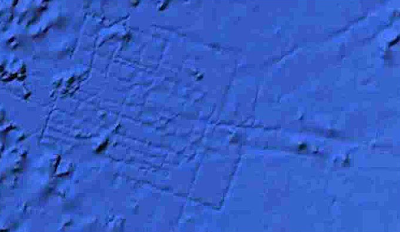 The British Museum has its mummies, the Louvre’s got the Mona Lisa, and here at the Museum of SuperNatural History we’ve been dying to get our hands on the Lost Continent of Atlantis.
So imagine the euphoria here at the MuSuNaHi when the alarm bells went off and word came over the squawk box that Atlantis had been discovered by an aeronautical engineer named Bernie Bamford using the latest version of Google Ocean.
But before we even got the chance to video conference those squares over at the Committee for Skeptical Inquiry and holler “Told you so!” into the com-sat link, the news wires were already reporting that some PR stooge over at Google was claiming the whole thing was a mix-up.
Apparently the image that had gotten everyone so excited - the appearance of some sort of vast network of city streets more than 3 miles below the surface of the ocean - is merely a left over “artifact of the data collection process...”
So just to be clear: the alternative explanation for this wanna-be Atlantis anomaly is that giant research ships sailing on the open, undulating ocean, dragging miles-long data-collecting cables behind them left a series of perfectly rectilinear marks on the ocean floor covering an area that is approximately the size of Wales?
Sure they did.
By the way, we’re going on record and predicting that “Artifact Of The Data Collection Process” will invariably become “The Man’s” dubious, “It Was Just A Weather Balloon” cover-up excuse of the 21st century.
For an alternative theory on where Atlantis might be, see our post regarding what’s going on down in Antarctica.
To read more, click HERE>
Posted by The Curator at 8:16 PM