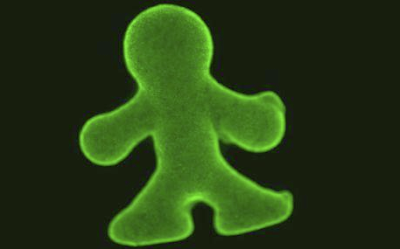 Hmmm...
Recently we reported on NASA and Google collaborating on super-smart robots, as well as some ground-breaking (and disquieting) advances in human cloning.
But clearly, in an attempt to avoid being outdone by their colleagues already pre-occupied by playing God, Japanese scientists have announced the creation of what could easily be the most terrifying example of cognitive dissonance ever: “a living doll made out of cancer cells...”
Granted, their insidious creation is only 5mm high, and resembles a cross between a Gumby Bear and a gingerbread man, but allow us to reiterate: “a living doll made out of Cancer Cells.”
To read more, click HERE>
Posted by The Curator at 8:12 PM