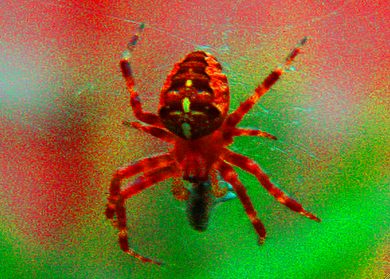 Researchers at the University of Texas, Arlington recently made a startling discovery: proof that the genetic material of lizards has successfully infiltrated mammal DNA.
Now normally in higher-forms of life, genes are literally “passed down” vertically from parent to offspring - as in: “I’ve got my mother’s eyes...”
But in this case, the genetic material was “passed along” horizontally from parasite to host - as in: “I’ve got my pet iguana’s eyes...”
And thus the term “Space Invader DNA,”since the genetic material is making an unwelcome, active incursion.
What excited us here at the Museum was how suddenly, the oft-derided, comic book-bio chemistry that post-rationalized the existence of Spider-Man - the assertion that an individual bitten by a radioactive spider could absorb that irradiated insect’s genetic material, that it would alter the host’s DNA, and then the host would begin exhibiting some of the spider’s traits - turns out to be less like science fiction, and more like science fact.
(All this had one of our interns wondering why he wasn’t highly adept at wielding pom-poms, having once received a hickey from an exceedingly amorous Jr. varsity cheerleader in undergraduate school.)
Some of the mammals the study sites as having had reptile genes integrated permanently into their species’ DNA include the opossum, the little brown bat, and the bushbaby.
To read, click HERE.
Posted by The Curator at 2:35 PM