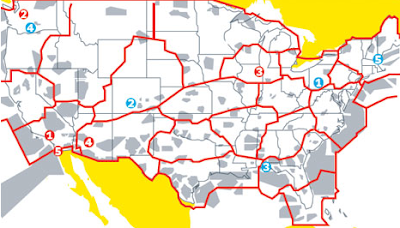 The folks over at Popular Mechanics have outdone themselves with a fascinating map that pinpoints the top 6 “hot spots” for UFO activity in the United States of America.
We were especially impressed with their video archives featuring a variety of eye-witness sightings ranging from the easily-explained to the Close-Encounters-of-the-bust-out-the-Reese’s-Pieces-kind.
They’ve even provided a guide to the top-6, top-secret aircraft most likely to be mistaken for UFOs (although we have our own theory on why that could be happening), and a check-list of what to do before you report a sighting to MUFON, the Mutual UFO Network.
In related news, Jay Melosh, a planetary scientist at the University of Arizona, Temp, recently went on record with a pretty far out theory; basically he says: “The Martians are already here, and we are them...”
Melosh is most famous for having helped forge the giant impact theory behind the moon’s formation (which happens to terrifyingly look like this), and advancing the theory that a cataclysmic impact with a comet or meteorite (ditto) led to the extinction of the dinosaurs 65 million years ago.
To read more, click HERE>
Posted by The Curator at 4:53 PM