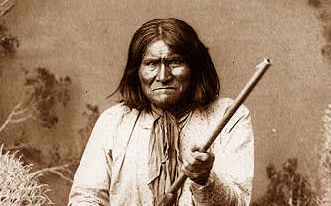 As if not being able to defeat Harvard in a football game were not socially awkward enough, now comes this bad news:
Tuesday, February 17th not only marked the 100th anniversary of the great Apache warrior Geronimo’s death, it also served as the perfect backdrop for the first act of this drama: the descendants of Geronimo have filed a claim in federal court demanding the return of their ancestor’s remains from Skull and Bones - the posh, private, privileged fraternity that is arguably the world’s most secret of secret societies; one whose membership ranks are a veritable roll-call of some of the most powerful families in America, including the Bush Family.
Yes, that The Bush Family.
In fact, it was none other than former President George W. Bush’s own grandfather, Prescott S. Bush, who is alleged to have personally stolen Geronimo’s skull and bones and returned them to the super-secret society’s super-secret aptly-named-clubhouse known as The Tombs, located on the Ivy League school’s New Haven campus.
Of course, Prescott Bush’s actions have always been excused away as a private-school boy prank; and from the rarified point-of-view of old money, it’s easy to see how the mere desecration of a legendary Native-American’s grave would seem like small potatoes compared with, say... running afoul of the Trading with The Enemy Act, during World War II.
Now those were some real world-class hi-jinx.
Back in 1942, The Union Banking Corporation and three shipping companies run by Prescott Bush, Averell Harriman and two other former fellow-Bonesmen, were all seized by the United States Government for doing exactly what one might suspect something called the Trading with The Enemy Act would frown upon most: trading with the enemy.
Fortunately for Bush and Harriman, the seizures were given “Classified Status” up until 2002, which conveniently afforded the two trading-with-the-enemy-pals with the opportunity to run for election, receive appointments to some of the highest government offices in the land, make a ton of bread, and squash anyone who might have gotten in their way.
Boola-Boola!
To read more, click HERE>
Posted by The Curator at 6:04 AM