Danger Will Robinson! Robots Narrow The Gap With Humans 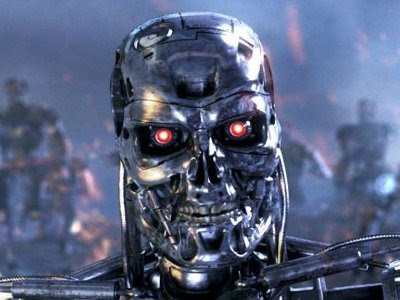 Here at the MuSuNaHi, we’ve been following the rapid and somewhat disconcerting advances in robotics for some time.
From Google and NASA’s collaboration on “machines smarter than man”, to news from the 2008 TED conference that the creation of cyborgs is imminent, as well as the US Army’s pack of high-tech robot dogs and of course, the inevitable robot rebellion which will no doubtably be the result of the Pentagon’s Small Business Innovation Research program’s call for contractors to design a pack of mobile, agile, and hostile robots whose main function is to hunt down “noncooperative human subjects,” we certainly have cause to sleep with one bionic-eye open.
But now, word out of Washington is that the gap between humans and robots is rapidly closing.
Due to the exponential increase in computer power - which doubles every two years - robots are becoming more human-like every day. Justin Rattner, Intel’s chief technology officer went so far as to predict that “machines could even overtake humans in their ability to reason in the not-too-distant future.”
Likewise, inventor and technology evangelist Ray Kurzweil provocatively asserts that robots will soon be able to pass the “Turing Test” - a test devised by the famed British father of artificial intelligence, Robert Turing - meant to determine whether or not a robot could successfully pass for a human.
The point at which robots and humans “merge” and become one is often and eerily referred to as “The Singularity.”
To read more, click HERE>
Posted by The Curator at 5:42 PM