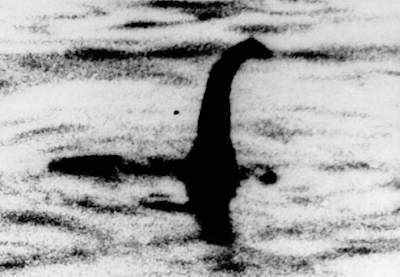 Here at the Museum of SuperNatural History, we’re always pleased to see when monsters and mythic beasts cross-over into the main stream media and get treated with the respect and reverence befitting these cryptozoological wonders.
So one can only imagine the hullabaloo that erupted this morning in the Museum’s cafeteria when Good Morning America began broadcasting a feature on the Loch Ness Monster titled: “Loch Ness Obsession Lives On.”
(Note to interns: please rush a MuSuNaHi Tote Bag over to the segment producer at GMA.)
Suffice it to say, all eyes were affixed to the Philco as an adeptly produced and scholarly toned piece on The Loch Ness Monster gloriously unfolded on the telly. (Although - in the spirit of giving credit where credit is due - this isn’t the first time Good Morning America turned their lenses on a mysterious creature.)
The sea-monster worthy story was replete with an appearance by the well-respected MIT professor Robert Rines, who first encountered ’Nessie during a Scottish Tea Party back in 1972. Rines has doggedly returned to the scene of the sighting every year for the last 37 years, intent on capturing physical and/or photographic evidence Loch’s legendary denizen.
Rines is convinced that whatever is in the Loch “...is probably a progenitor of something that should have been dead 65 million years ago.” For those who would pooh-pooh the professors prehistoric premise, we would just like to remind them of the Coelacanth - dubbed “the living fossil” - this extraordinary creature was believed to have gone extinct at the time of the dinosaur, until a living specimen was inexplicably rediscovered in 1938.
To watch the GMA piece, click HERE>
Posted by The Curator at 7:07 PM