“Man (Maybe) Walks On Moon” - One Giant Hoax By Man, Or One Massive Conspiracy By Mankind? 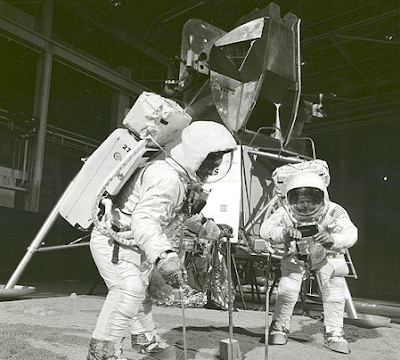 July 20th, 1969 marks the 40th anniversary of NASA’s successful attempt at putting a man on the moon.
Or, some would claim, it marks the 40th anniversary of NASA’s successful attempt at faking putting a man on the moon.
According to a 1999 Gallup Poll survey, approximately 6% of US Citizens believe the Apollo Mission was a hoax and another 5% had “no opinion.” The credit - or blame - for this conspiracy theory can most likely be attributed to Bill Kaysing and his 1974 self-published book titled: “We Never Went To The Moon: America’s Thirty Billion Dollar Swindle.”
Interestingly enough, Kaysing was no run-of-the-mill crackpot, he worked for Rocketdyne (a division of North American Aviation, and later of Rockwell International) where the Saturn V rocket engines were built.
Additionally, Warner Bros.’ 1978 thriller Capricorn One - about a faked mission to Mars, is also cited as a major catalyst for increasing global suspicion about the veracity of NASA’s lunar accomplishments, and to this day, the “fact” that the US faked landing a man on the moon is taught in Cuban schools.
And as recently as 2001, Fox TV aired a “fair and balanced” piece of broadcast journalism titled: “Conspiracy Theory: Did We Land On The Moon?” that investigated the possibility that the Apollo mission was indeed a hoax.
To read more, click HERE>
Posted by The Curator at 8:33 PM